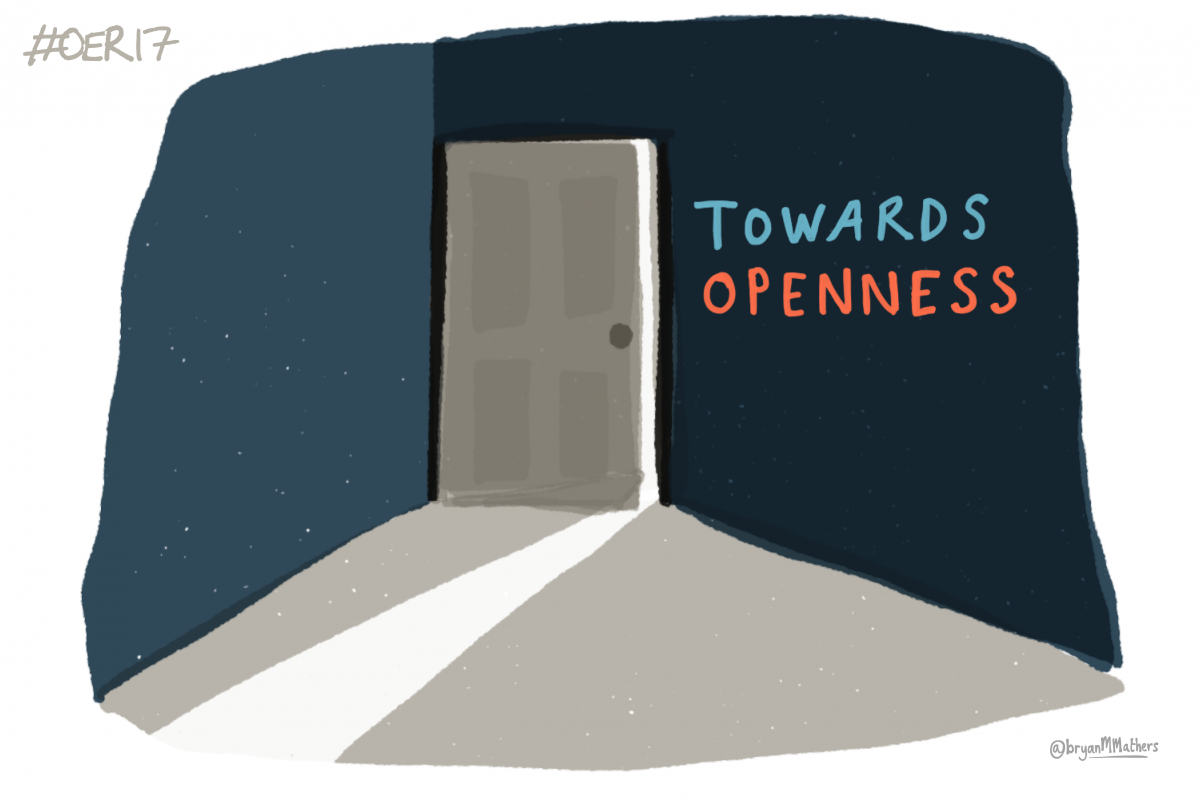 I am not sure why, but it took some serious licorice intake to overcome my inertia in order to write something reflecting the Towards Openness workshop I co-facilitated at #OER17. It might be that the impressions and ideas are hard to sort out, but you have to start somewhere. What this shows, though, is that we somehow seem to have hit a nerve. People I admire for their work have responded to the theme of safety in open online learning in ways that I would have never expected. We had provocateurs who took time and effort in coming up with mind-boggling provocations, we had fantastic onsite participants who came up with interventions to marvel at (find all resources on our website), Frances Bell and Jim Groom blogged about the workshop in retrospect, Bryan Mathers drew (Is that an accurate description of his magic?) a couple of images during and after the workshop. We had a Missed Conversation on Virtually Connecting with onsite participants, provocateurs and others who could not make it to our session (during which I accidentally set the frame to fixate on me, which only adds to the embarrassment of moderating an online session with people who are both smarter than me and are more eloquent conversationalists than I am). The twitter stream includes a wide range of educators. So this would be enough material, ideas and conversations to write plenty of posts about, which probably made it harder for me to start the first one.

A little more than weeks ago, I co-facilitated a workshop on safety in open online learning under the theme of TowardsOpenness with Kate Green and Markus Deimann. Martina Emke was our session chair and she was a great help both during the preparation as well as during the workshop on site in London. She trusted us with our ideas and it was great to have a session chair as another set of eyes, ears and brains testing the concept and workshop description for flaws. During the workshop, she jumped right into the group work and helped us to overcome some of the minor miscommunication issues you always have at the beginning of a working session.

In preparation for this session, it was important to us to include provocations from people who circle OER17 on a wider orbit than most regular OER conference attendees, so our selection of provocateurs was a conscious one. Additionally to Rob Farrow who, of course, is one of the the backbones of the OER and Open Education ‘scene’ in the UK and beyond, we were glad to have Chris Gilliard, Sarah-Jane Crowson and Ahmed Kharrufa onboard. It was interesting to me that especially Chris and Ahmed set the tone of their provocations very well by also choosing a certain backdrop for their videos. In an email, Chris apologized for the dark basement in which he recorded his short video, but it had a “Mr. Robot feel” to it and it thus fit perfectly to his thoughts on surveillance, automation and the work by Shoshanna Zuboff. Ahmed tried to include as little information about himself as possible – you see a white wall as backdrop and not much else (of course, Kate noticed this much earlier than I did).

We had originally hoped to have 90 minutes for our session (not sure why, but we even calculated for that length in our session description) so we were a bit worried to pull this off in just 60 minutes. Then again, in any good workshop you always hope to have 30 minutes more at the end, no matter how long it really is. And it really helped that we had other means like the VC Missed Conversation session, our etherpads and the twitter stream to continue to think about ideas and solutions. It also was a great relief that we had thought about documentation before – quite often it happens that you are find yourself in a workshop and the generated ideas end up on a flipchart that only makes sense if you were a part of the team that came up with it. This can be frustrating. Asking our participants to let us record their presentations certainly put them on the spot and I think some were uncomfortable with just putting their rough ideas out there, possibly associated with their name and reputation. But recording them was also interesting when considering the theme of the workshop of safety in online learning. Being recorded on the spot certainly did not add to the perceived safety of some and anyone who was ever asked to spontaneously speak in front of a camera for 2-3 minutes knows how intimidating this can be. My experience from this workshop but also from the ones at #OEB16 and #OER16 is that this possibly limits the audience a bit, but it does help for groups to come together and do work in a short period of time. I think we will need to keep working on the details but knowing that they will be recorded at the end of a workshop helps participants to focus on one key aspect in group work which can help foster a constructive discussion, especially when a workshop theme is as wide and complex as thoughts and ideas about safety in online learning.

Just to be clear, the workshop was not designed to produce tangible outcomes that can be implemented straight away. The aim was for participants to consider different dimensions and entry points to safety in online learning. These could be related to privacy, to bullying or doxing, but also to the discussion around safe spaces where learners can ask stupid questions while they maintain a right to be forgotten, to give just some examples. We were hoping to enable a process in which workshop participants would discuss issues that they themselves bring to the table, possibly provoked by others. Output was not important at all. Still, I just cannot restrain myself from pointing to these awesome results:

One team formed around Chris Follows, Claudia Lehmann, Richard Heinen and Tobias Steiner worked on a solution for internet users to create “more noise than signal”, to artificially create so many data points online (noise) that their actual data (signal) would not be detected. I am not sure if they knew this then, but something like that actually exists with regards to online advertising: it is called AdNauseam and Google blocked it from Chrome, there even is a campaign to #FreeAdNauseam. There also is an alternative called TrackMeNot.

Another team around Autumm Caines thought about the way that networks effect human relationships and how these relate to safety online. This did not end up with a product or a process but the questions around representation in safe and unsafe spaces, ideas around human interaction through technology in onsite and virtual spaces can only benefit from conversations like these. I look forward to following these continuing conversations.

The third team at our workshop formed around Jim Groom, Bryan Mathers, Rob Farrow and Brian Lamb. They picked up on some thoughts about the Personal API that Tim Klapdor summarizes really well here, some ideas about the Next Generation Digital Learning Environment and concepts of data and ownership (I am pretty sure there are some parallels to this post by Jim and he also put the group’s idea into context in this post here).

Bryan Mathers documented and illustrated the ideas of the group, so there’s plenty of resources for you to further dig into this. For me personally, three inter-related key take aways stands out:

Documentation in different ways and modes is key. Having the recordings of the group presentations (as low-key as they may be; after viewing them some digital media scholars suggested for me to take part in a media training), the workshop resources, the etherpad, the twitter stream, the blog posts and everything in between helps to build connections, these resources literally become campfire materials if you have the network to ignite them. Deciding who to ask for a provocation is a political choice, the choice of a workshop format will always include some and exclude others and documentation in different ways helps to provide different entry points.

These entry points would be much less meaningful without people who we had them in mind for when creating them. We guessed that some people would be interested in our workshop theme but that they would not be able to participate on-site (because another parallel session or because they could not come to OER17). We knew (from our own experience) that we would be excluding some by asking them to record their presentations. We were hoping to create resources and pathways for these people to join the conversation. We can only get better at this and any feedback is much appreciated.

All of this takes time. I remember that I briefly asked Alan Levine at #2016DML how long he worked on the preparation for his pre-conference workshop. He said that he must have invested somewhat around 300 hours. I don’t know how he managed to do this and I almost felt like exploiting him as a workshop participant. Then again, all of us have spent time in a not-so-well-prepared workshop or conference session at some point in our lives and that can feel like someone else is dis-respecting participants’ valuable time at a conference. We wanted to take time to consider different ideas and approaches, to provide documentation and the Missed Conversation. I think people recognize that, they value this input and they “give something back” which can then lead to ongoing discourse and contributions to a topic. And seeing that we managed to provoke some thoughts and ideas feels great.

Find more of Bryan Mather’s work from OER17 at: http://visualthinkery.com/project/oer17/

We will keep updating the Towards Openness website and the workshop site (we are a bit behind here).